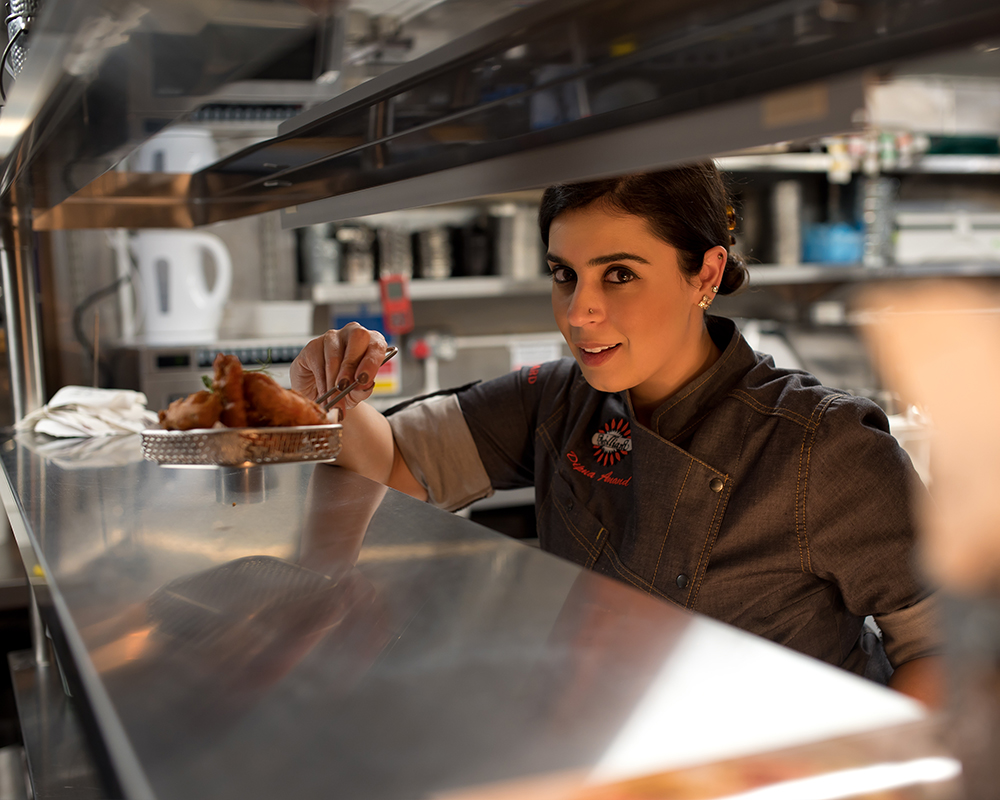 Dipna Anand was born into a family of chefs and restauranteurs. Not only is authentic Punjabi cooking in her blood, but she’s doing everything possible to share it – teaching, publishing, managing the family restaurant, embarking on a solo venture, and now catering for premium sports venues. 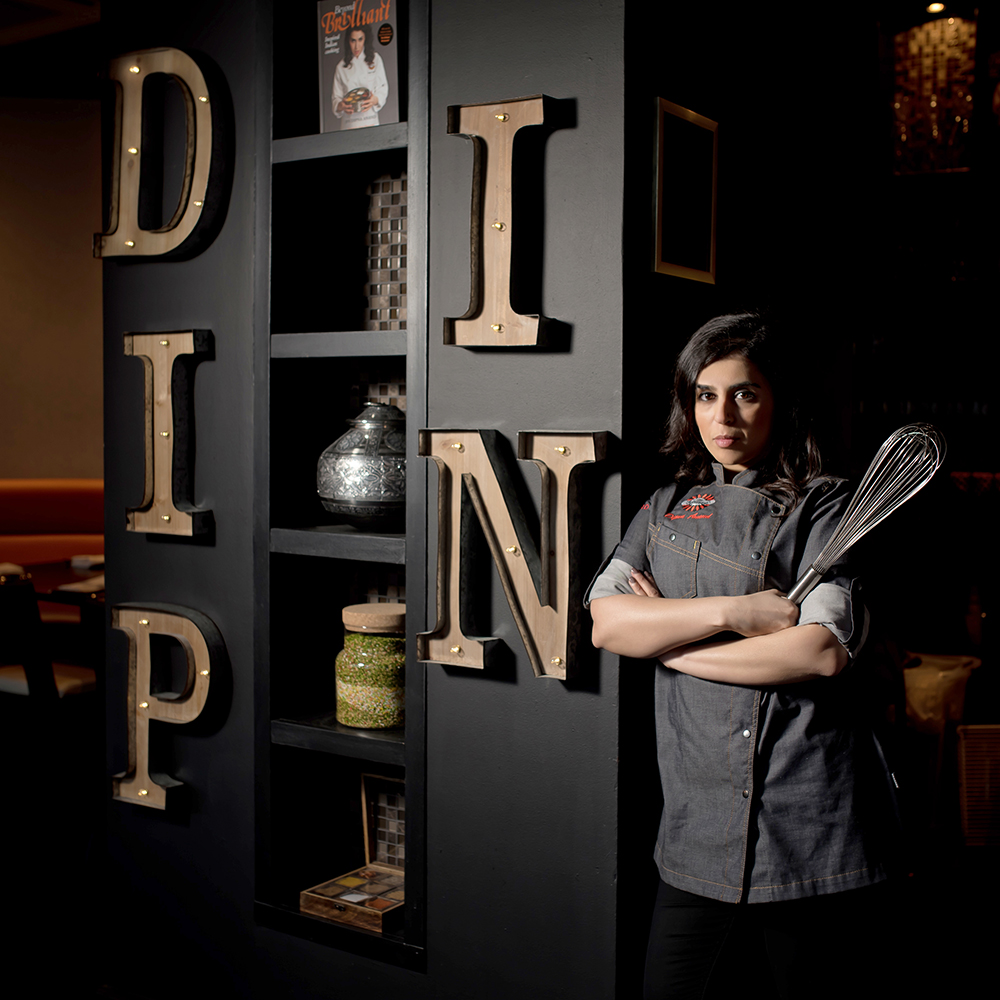 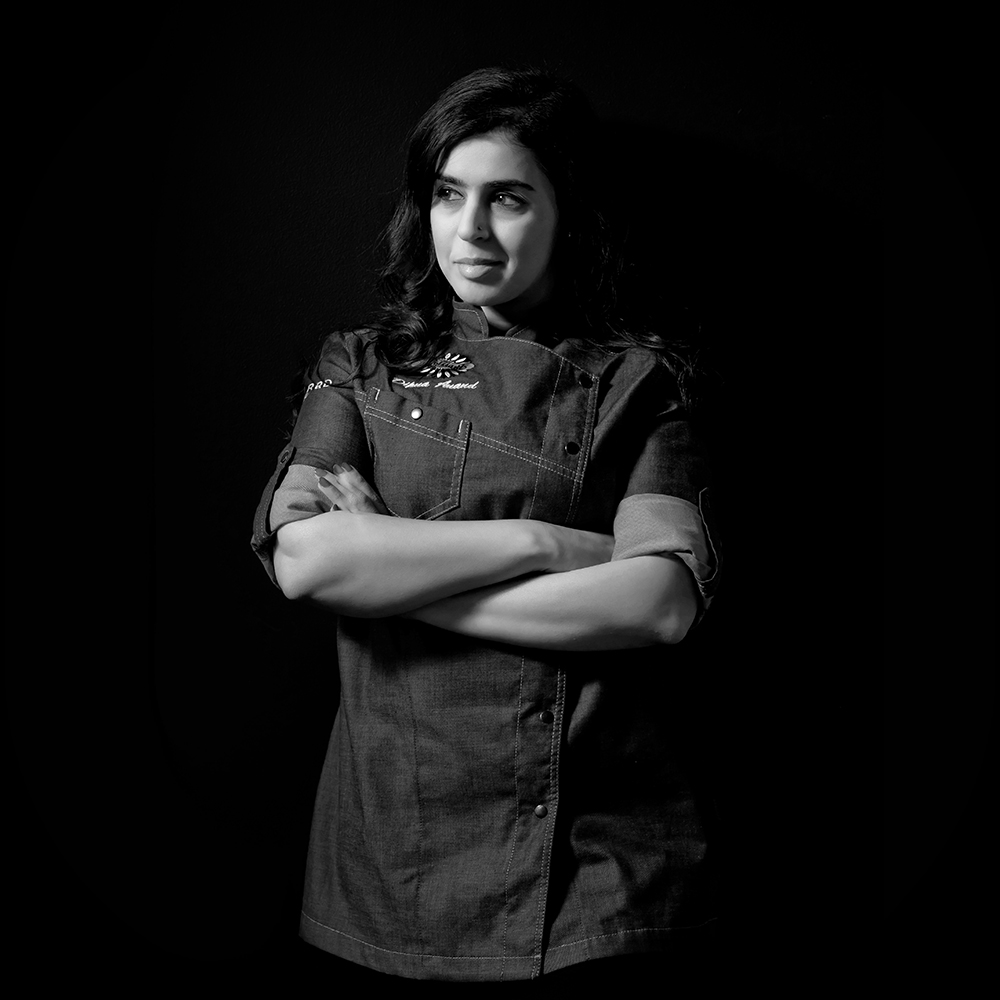 I met up with Dipna at her spanking new restaurant in Chelsea, Dip in Brilliant.

“I always knew that I wanted to be a restauranteur,” she says. “From a very young age, I used to watch my father in his famous restaurant Brilliant and aspired to be like him. I learnt all the top tricks and secret recipes while laying tables and talking to customers.”

Dipna’s father, Gulu Anand is an integral force in Dip in Brilliant. Trained by his own father, he has taught the team of chefs at Dip In Brilliant to make the signature dishes from his own restaurant. The Punjabi food is authentic, thali-style, but there are ‘twists’ to reflect Dipna’s own heritage as a British Asian – from chocolate brownie served with jalebi ice cream to sticky toffee pudding with cardamom. “It was always at the back of my mind to open a restaurant in Central London but I wanted a concept that describes me… a relaxed restaurant where you could ‘dip in’ and ‘dip out’ rather than fine dining.” 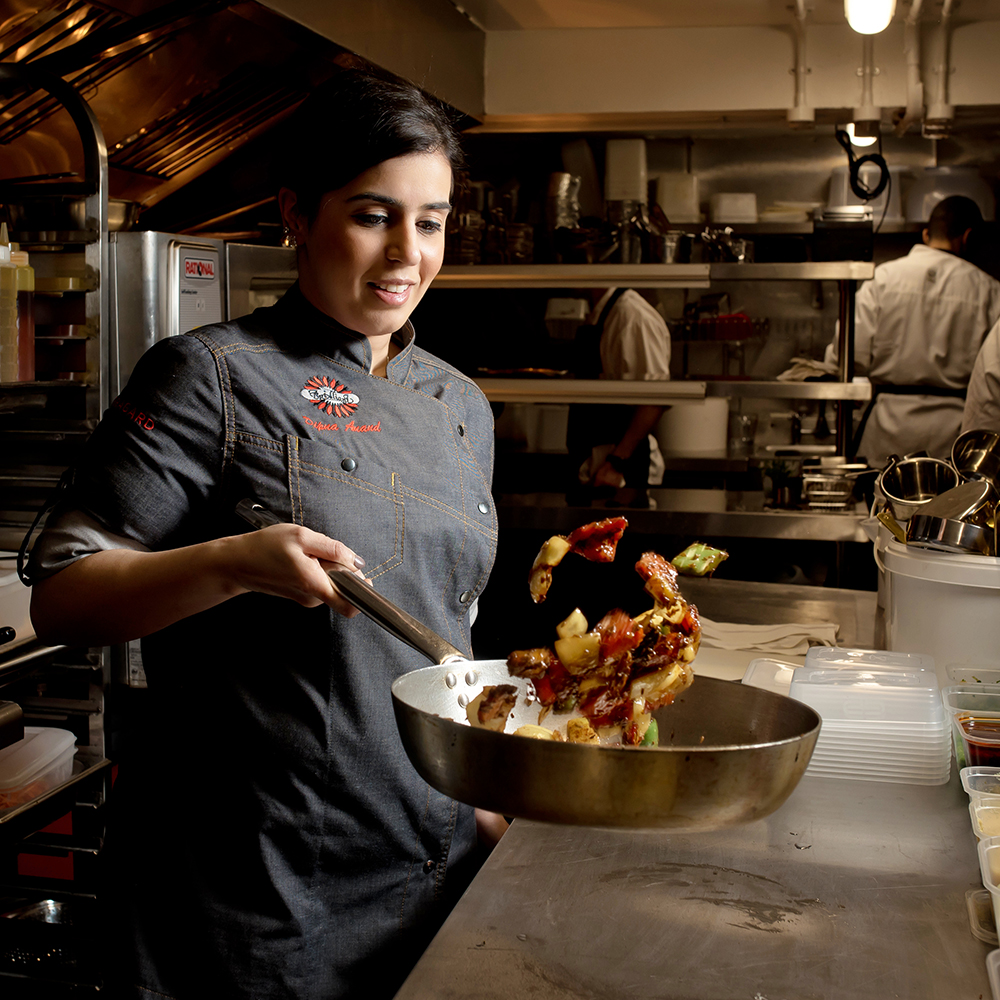 Since she gained a first class honours degree in Hospitality and Catering, followed by a postgraduate scholarship, Dipna has made it her business to share her secrets. Her first cookbook Beyond Brilliant featured recipes from the Brilliant restaurant, while her second book Dip in Brilliant to be released over the Summer will share Indian recipes with a British twist.

She continues to teach Indian cuisine in colleges and universities around London and has an exclusive partnership with Restaurant Associates and Levy (part of the Compass group) for whom she is brand chef for a Punjabi range of dishes.

Dipna is currently cooking up a storm, supplying her own recipes and branded foods to major sporting venues, including The O2, Twickenham Rugby Stadium, SSE Arena and excitingly, Tottenham Hotspurs’ new stadium set to open in August. 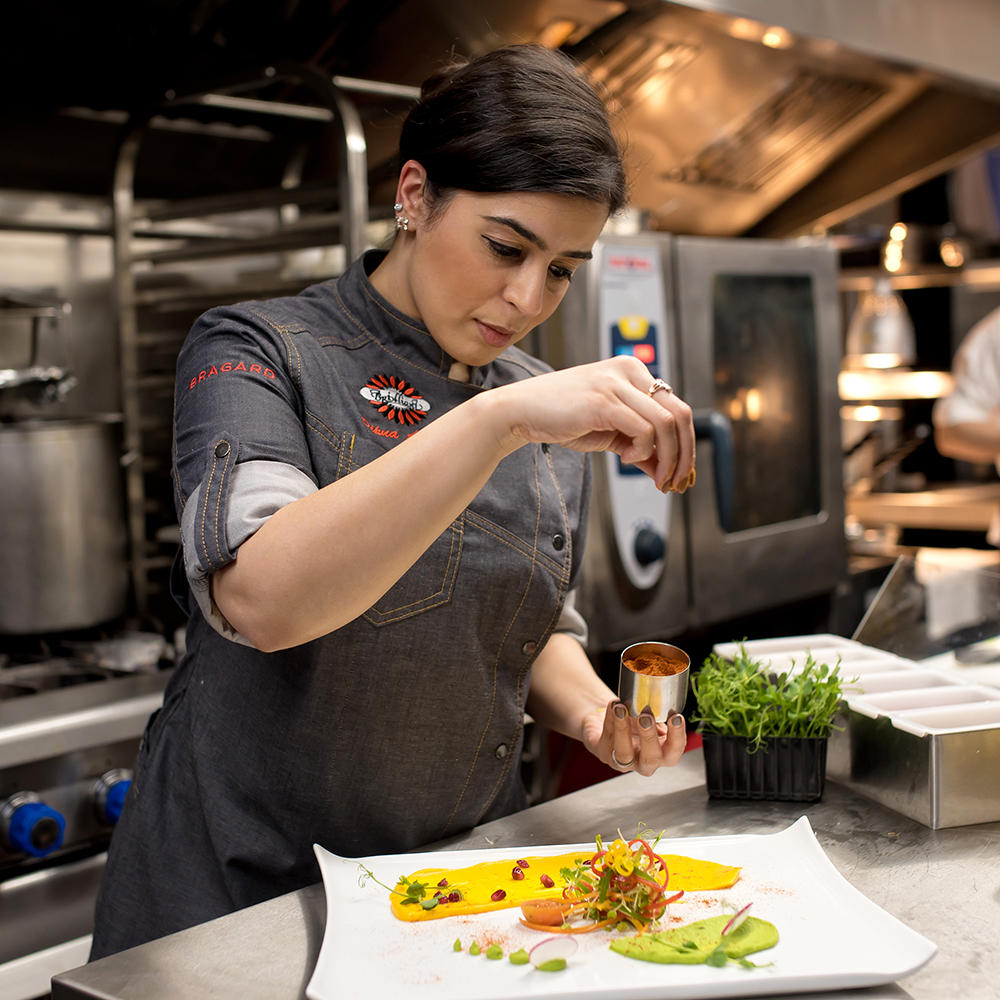 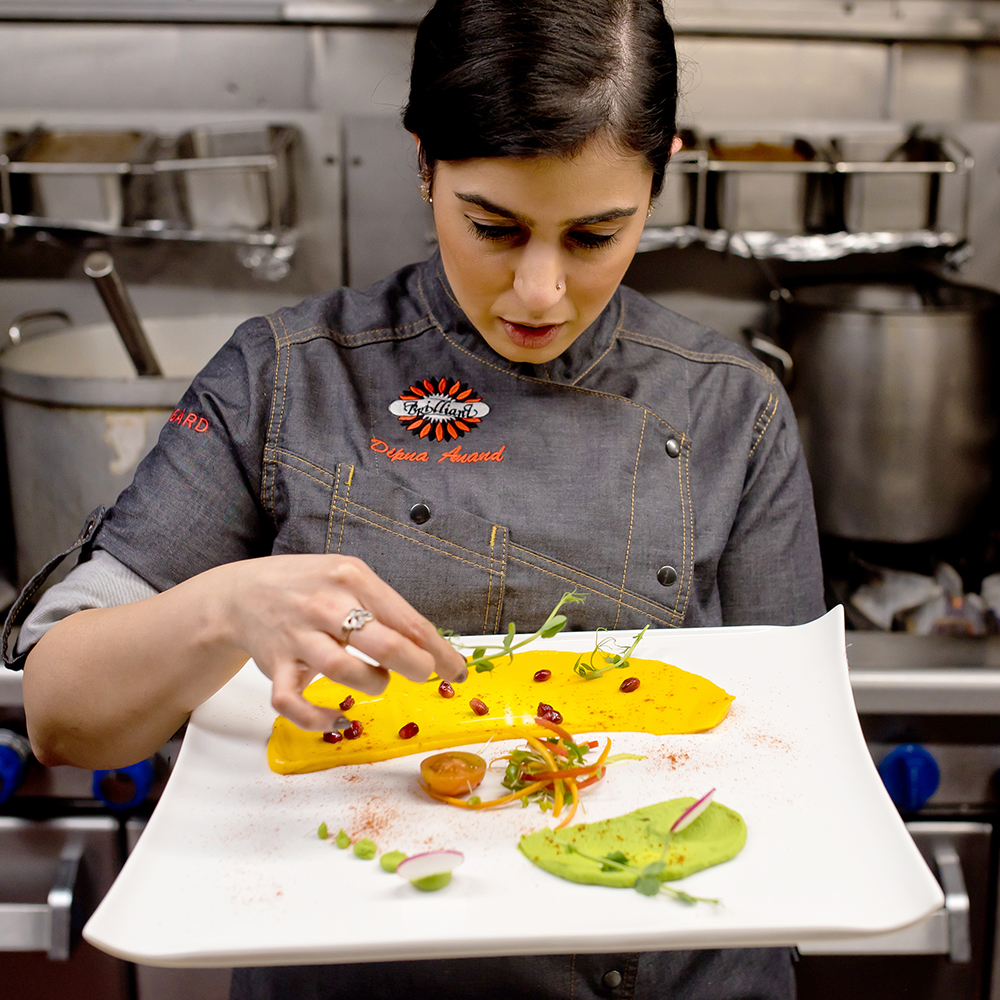 While luxury, exclusivity and fine dining are not necessarily associated with football stadiums, Dipna tells me that the 61,559-seater stadium will redefine the premium offering at sport and entertainment events. Level four of the stadium will house premium suites and lounges including the flagship restaurant and lounge The H Club. The exclusive Members’ Club located on the halfway line, will offer a range of Michelin-starred dining experiences, including a chef’s table and player’s table. It will also feature an informal bar for light snacks and a brasserie style menu.

“I know nothing about football but when I was called into Tottenham for a virtual tour, I was wowed by the whole concept. I immediately told them that I would love the opportunity to showcase my Brilliant Punjabi offer here.”

Dipna will be joined by the Roux family (Albert, Michel Jr and Emily), Chris Galvin and Bryn Williams, in providing their signature fine dining experiences at different match days next season. 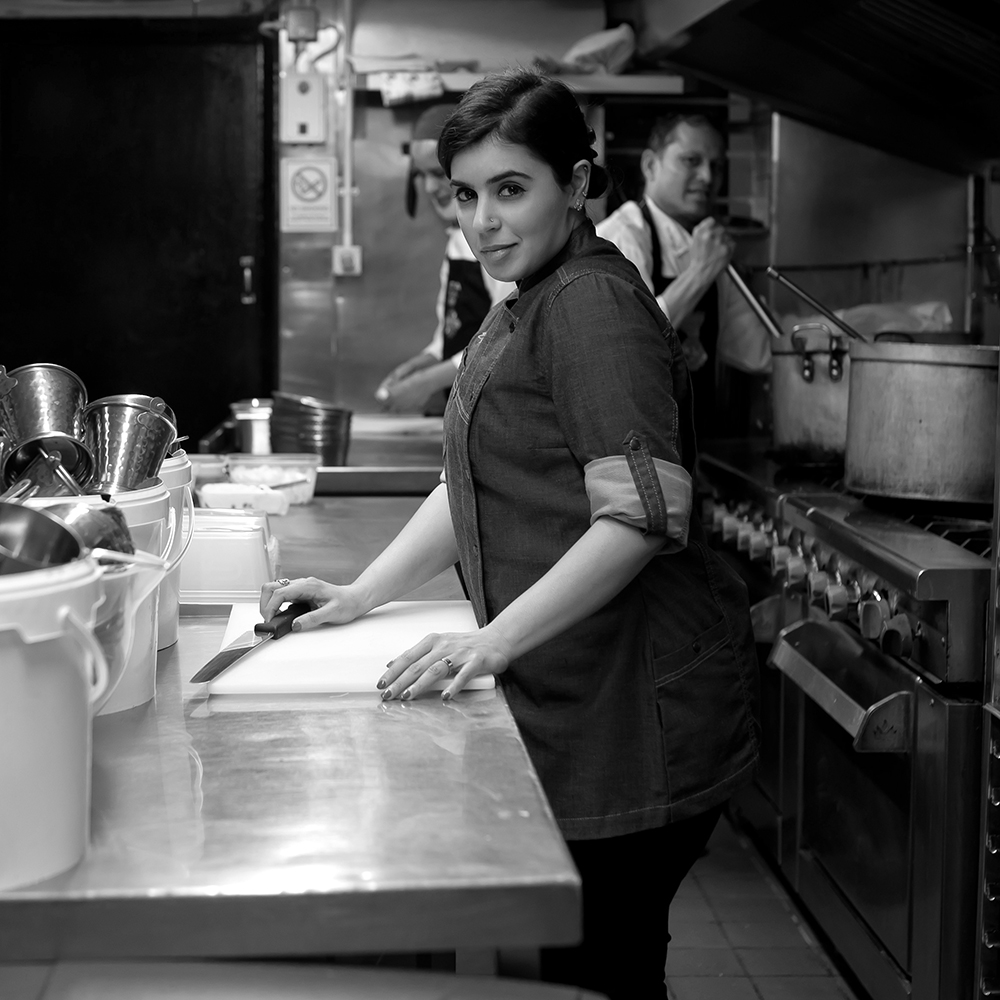 “I’ve seen the stadium grow over the last few months. Just to know that my name is going to be placed with key names who are all partners at the stadium is in itself so motivating.

“It’s the first time we’re officially bringing Punjabi food to football. Everyone loves a curry and a beer, so while it’s always been the norm to have Indian food with football it’s never been taken to the level of bringing it to a stadium.”

Though the precise details of her menus at Tottenham are still under wraps, Dipna described one of her starters, a mixed grill aptly named a ‘Kick Off’. “It will be the real deal. Tasty, little versions of Punjabi classics.”

Dipna believes that sports venues are starting to catch on to the need to offer the public a product or service that they want. “You would have never thought you’d get authentic Indian food at a football match or an NBA basketball game. But now taste buds have evolved, the demand is there and these venues are becoming a bit more daring with what they offer and they’re bringing in the experts who can support that.” 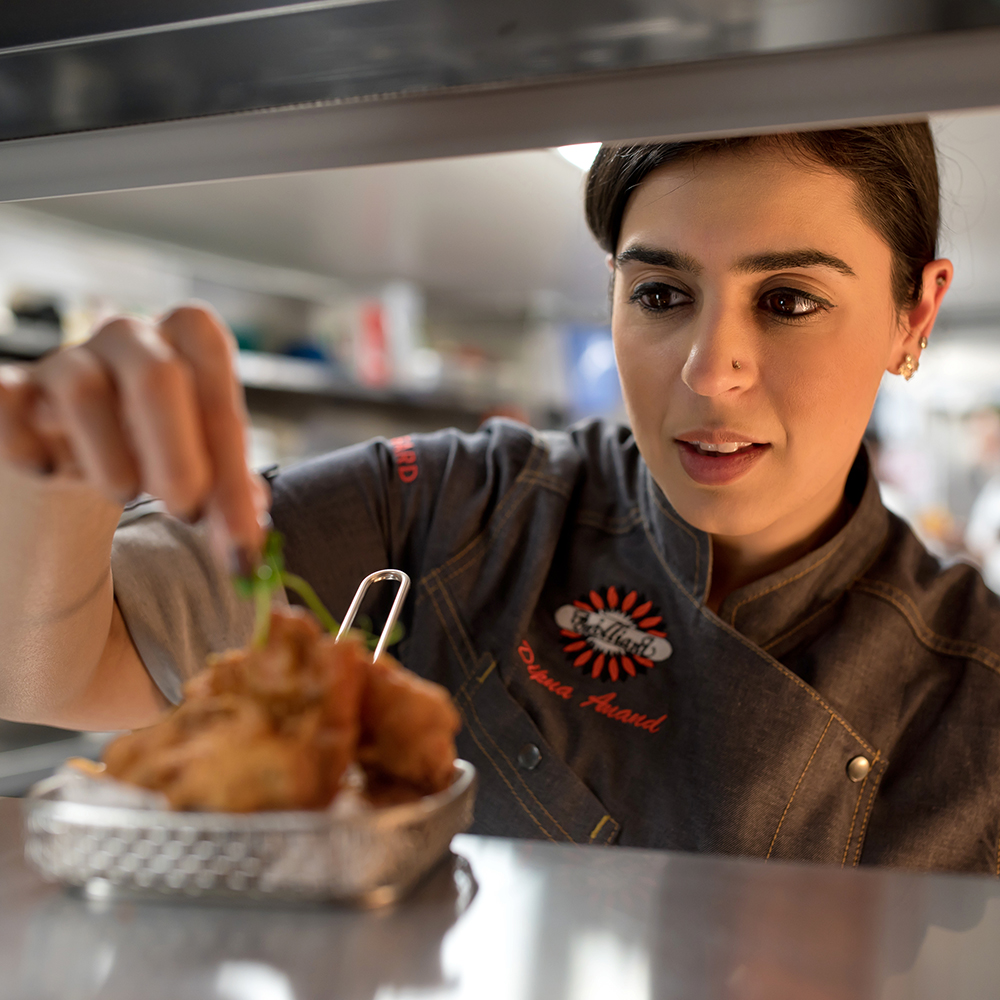 As a woman in a male-dominated industry, Dipna is seen as a role model for female chefs. “I get a lot of attention because I’m a woman in the kitchen. Through my cookery school I meet many other women who also want to pursue careers in the chef’s field.  People say they aspire to be like me which motivates me to be even better and help change perceptions.”

You can’t help but be awed by Dipna’s tenacity to share her expertise in Indian cuisine. She tells me that it is her parents who are the secret ingredient to her success.

“My mum and dad are my biggest inspiration and biggest blessing in life. My dad is still running around in a restaurant at this age, still so passionate to pass on his skills and knowledge to his staff. I want to follow in his footsteps. He’s my number one reason why I strive to do even more.”