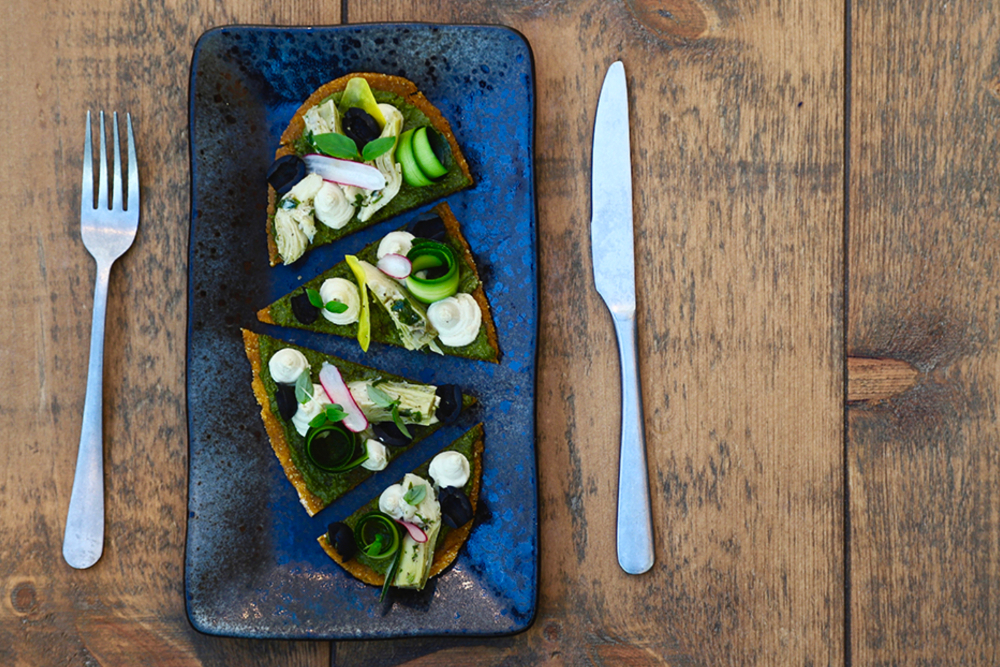 Launching an ambitious new food and lifestyle concept in one of London’s prime retail areas is not for the faint hearted. Nima Suchak finds out the philosophy behind OmNom, Islington’s newest plant-based restaurant and yoga space.

Based in Islington Square, just off Upper Street, occupying prime restaurant space, OmNom boldly sits alongside an array of fashion, artisan and lifestyle brands. The new restaurant and wellbeing space presents authentic yoga and mindfulness, alongside hearty and healthy vegan food in one of London’s most famous foodie haunts. 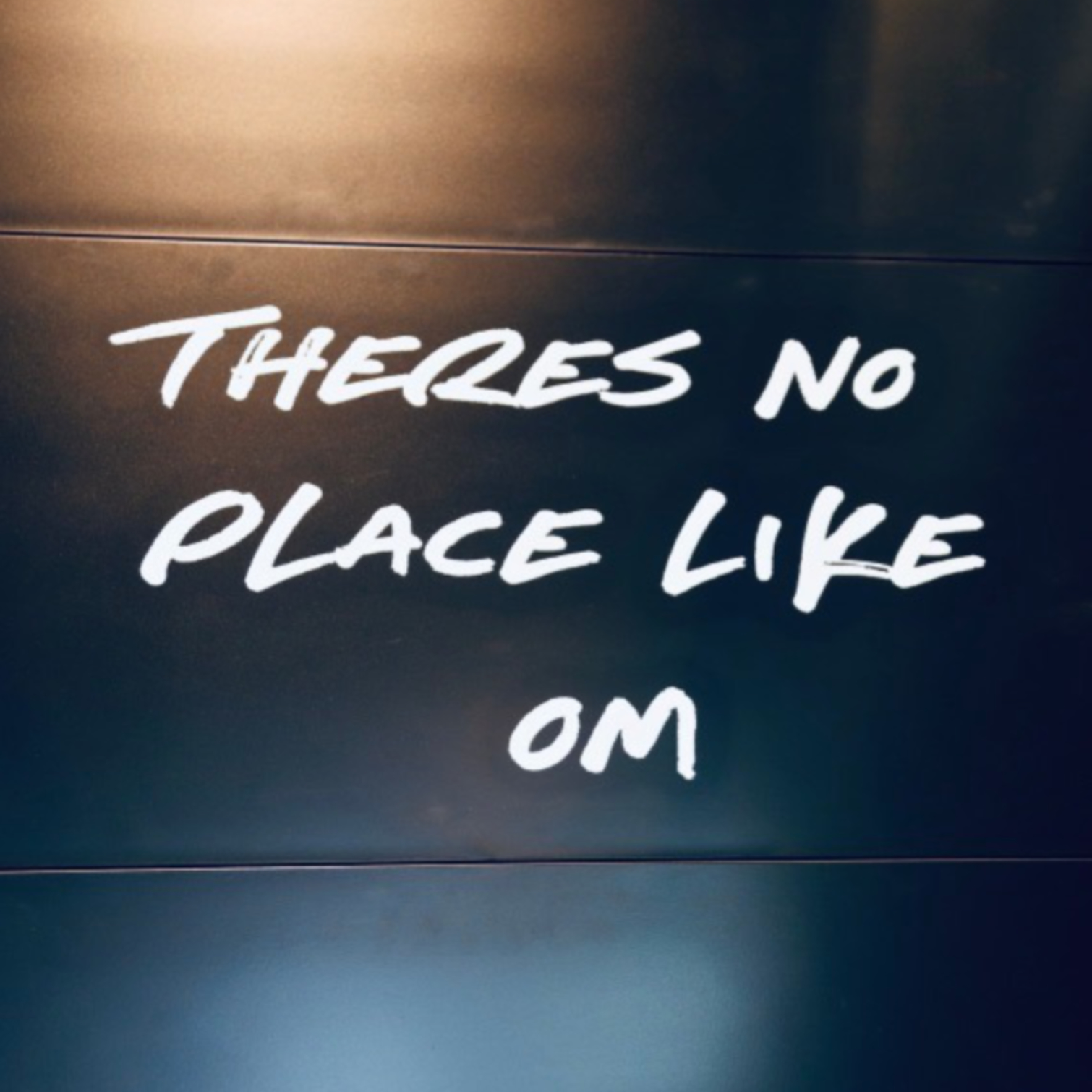 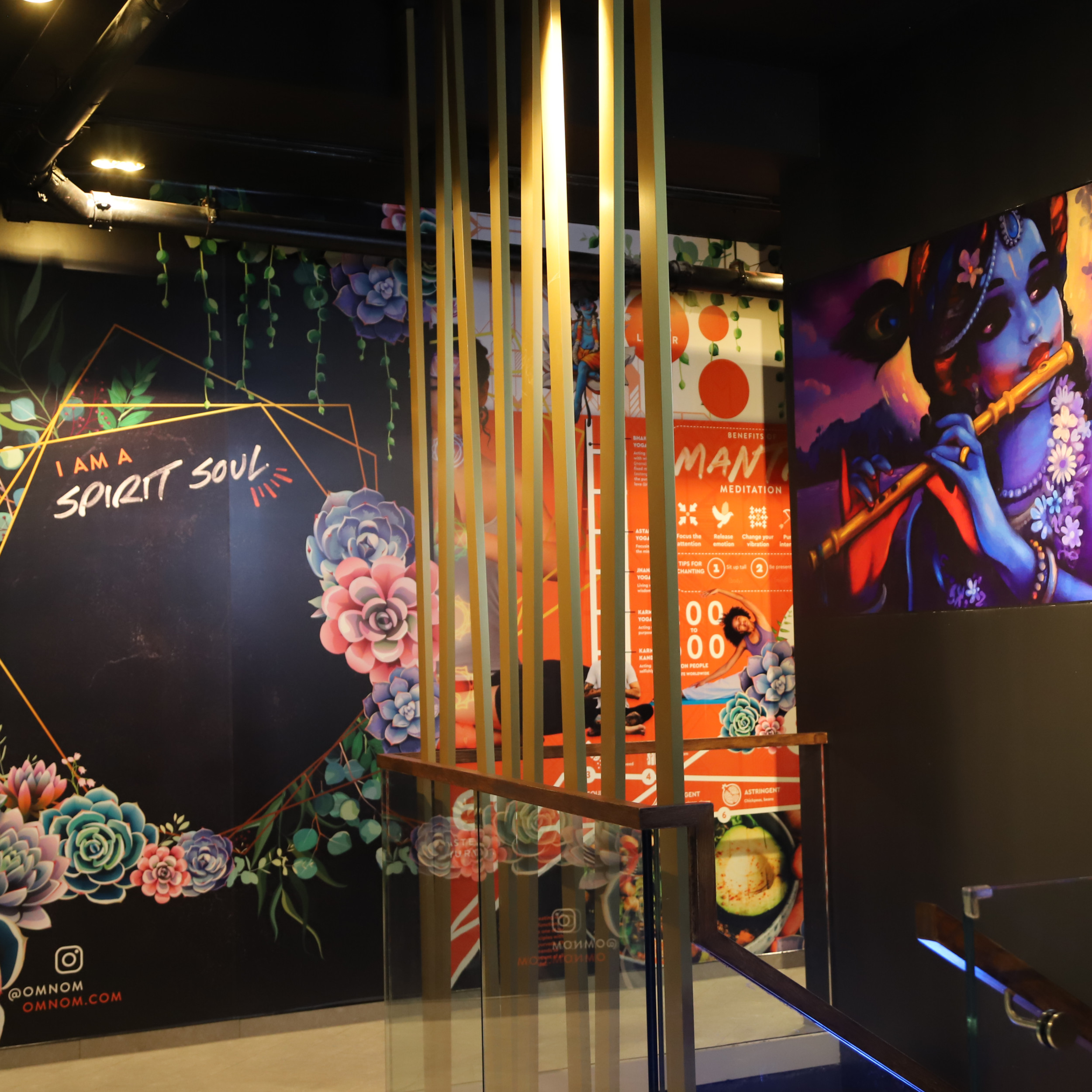 I catch Managing Director Yuvi Rana after a well-attended yoga taster session. He tells me there has been a steady stream of curious and enthusiastic diners checking out the brand new opening which sits alongside family club Maggie & Rose, Odeon’s first Luxe & Dine cinema and the high-end gym operator, Third Space.

Food for the soul

“The whole ethos of OmNom is to serve food that is ‘kind to your belly,’” says Yuvi, as we settle down to check out the fully vegan menu. “Plant-based eating has become more popular, but though there is a rise in its popularity, a lot of places are simply focused on selling junk food. It might be vegan, but it’s not particularly good for you.”

OmNom’s eclectic global menu is part-designed by LA-based Radhi Devlukia-Shetty (wife of motivational speaker Jay Shetty). They have incorporated Ayurveda-inspired dishes along with better known comfort food. Yuvi points out fun dishes such as the ‘moxerella’ stuffed Jalapeno Poppers; a sharing Slider Trio of three mini burgers from around the world—Japanese wasabi, Mexican bean, and Indian aloo tikki; and even a nourishing ‘Bhakti Bowl’ of warming lentils and rice. The completely dry bar serves a range of non-alcoholic wines, mocktails, and drinks, as well as quirky post yoga smoothies such as the Chocolate Almond Croissant. 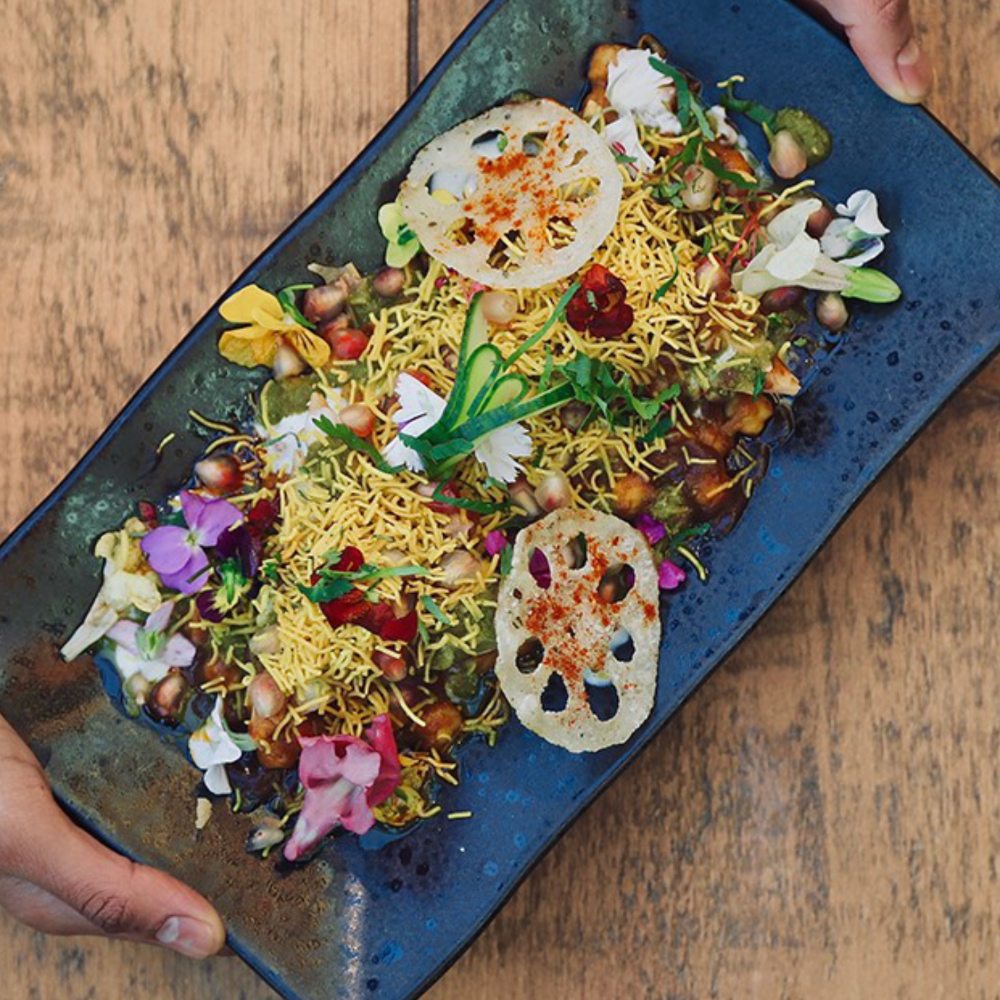 OmNom will be open all day, starting with a yoga session at 6.30am, and ending with last orders at 9.30pm.

Going further than the upmarket eating and drinking experience, OmNom’s USP is its focus on a ‘complete form of wellness’. While the restaurant space takes up the ground floor, the heart of the action continues in its ‘OmSpace’ a 1000ft urban wellbeing studio on its first floor

“We hope for this to become a hub for wellbeing in London,” says Yuvi. He tells me that OmSpace provides their own brand of yoga and meditation sessions, as well interactive classes and seminars, book launches, and influencer events.

“Yoga is not simply about fitness but more about connecting the body, mind and soul together,” he says. “A lot of people can feel intimidated by yoga and yoga types, but this is a welcome arena where we want to make yoga, meditation and mindfulness accessible by all.” 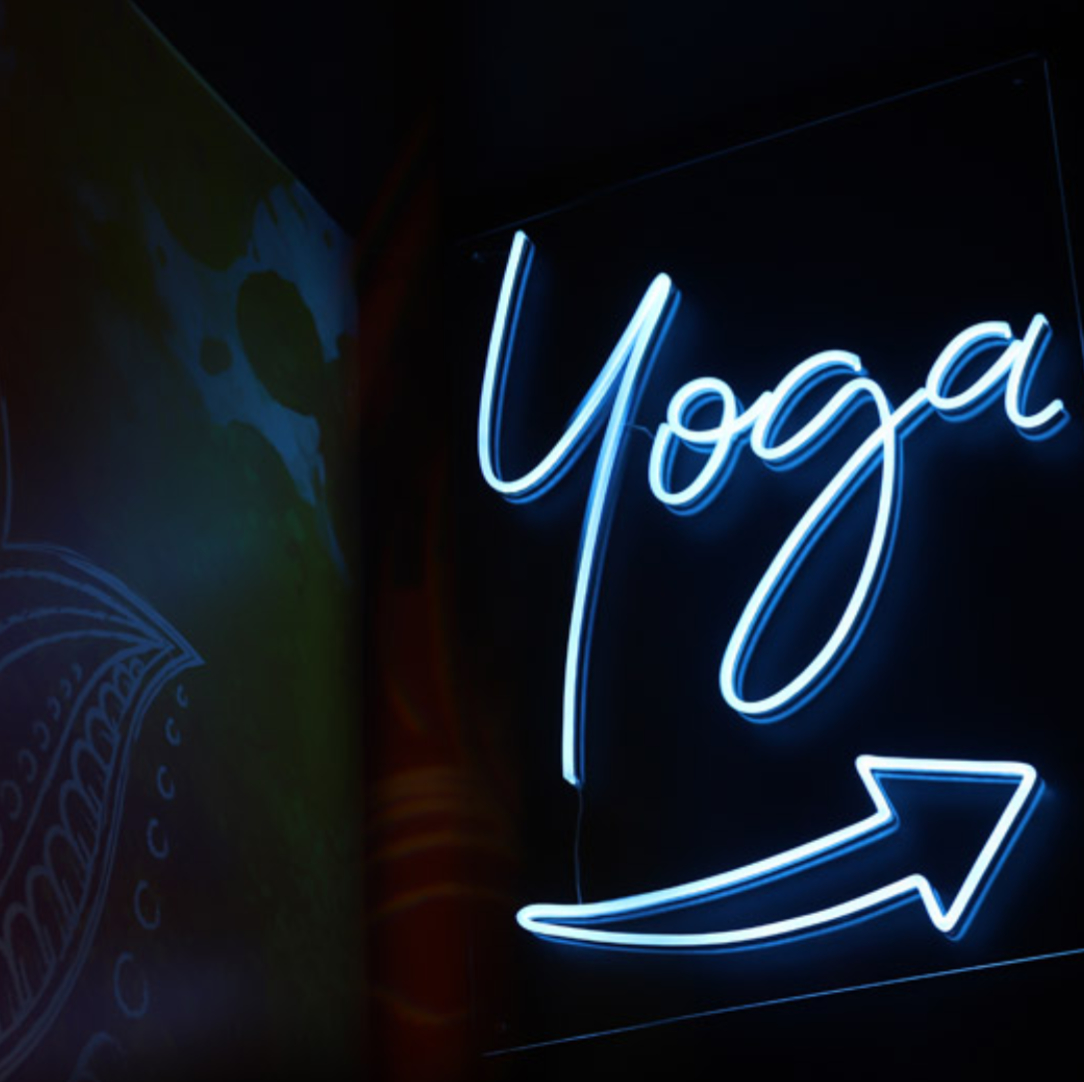 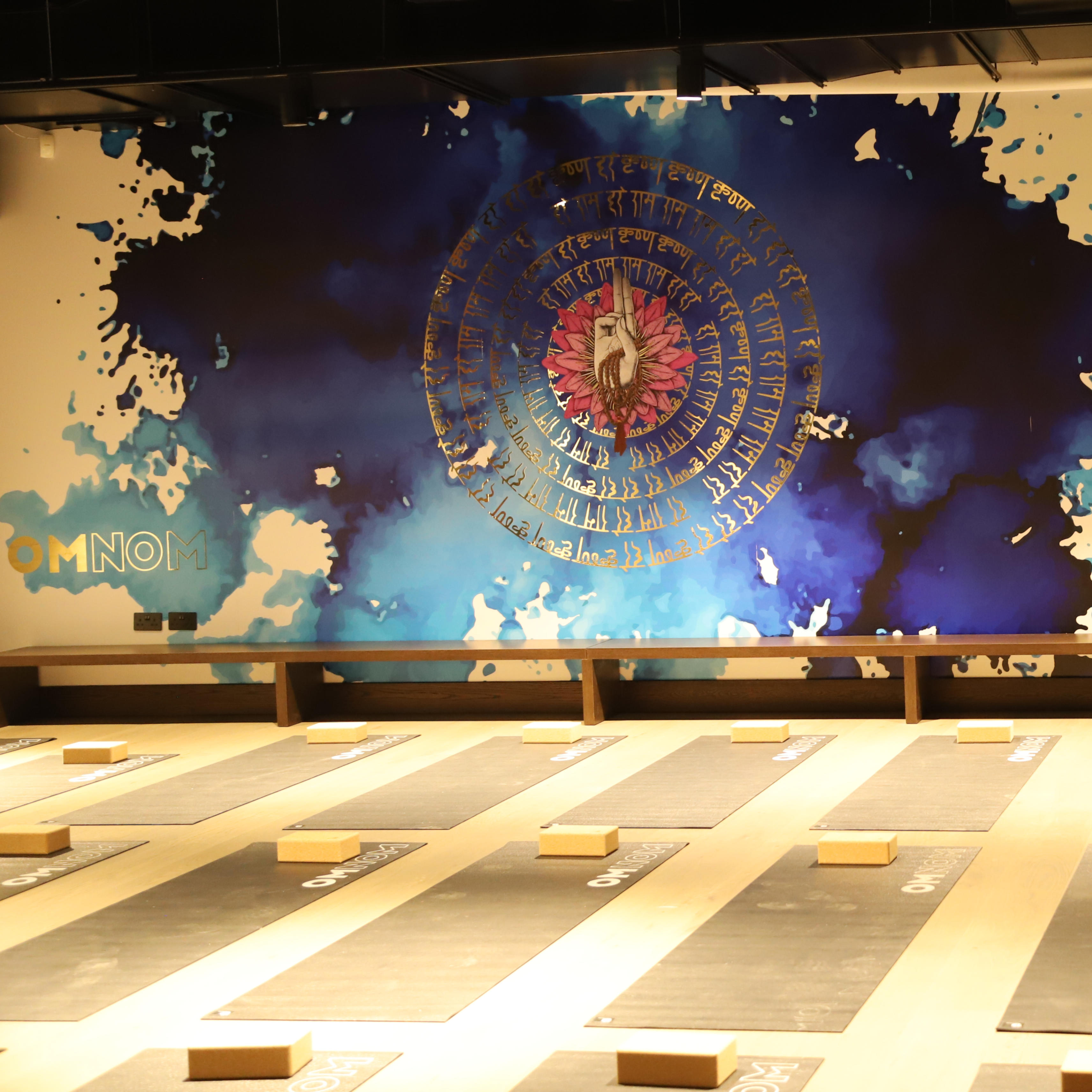 Occupying such a large prime space on one of the biggest and most expensive private developments in London is hugely demanding, particularly for a business which doesn’t have a track record. But rather than being led by profits, OmNom is set up as a charity – there are no shareholders or financial interests for any individuals involved. “We didn’t want finance and ownership to be the motive behind what we do here,” says Yuvi. “We have a board of directors, so the focus of what we want to share with others is not compromised.”

The main charitable aims and objectives for OmNom are hunger relief, where they will feed a person in need for each meal they sell, and use the facilities to prepare and serve the homeless in London. Yuvi tells me the business has partnered with charities in the UK and abroad to fulfil these aims.

It is perhaps this commitment to helping the needy and promoting a holistic way of life that has attracted the attention of its group of backers.

Celebrities such as Russell Brand and his wife Laura have also given the concept of OmNom their full support. “As a yoga practitioner and someone who genuinely believes in helping people, Russell Brand was drawn to be an ambassador for the project,” says Yuvi.

“Developing a site of this size in London would normally cost millions, but we have received huge support by various individuals so able to start up at a fraction of what it would be expected to cost.

“There have been many blessings on this journey. When this site came up, the landlord happened to practice yoga and follows a plant-based diet. He loved our concept so much that he put his full support behind it.

“We believe that when the concept is strong and you have a good team behind it you can overcome any challenge. Our team has done so much on a voluntary basis to ‘give back’. OmNom has become a channel where we can all share something we truly believe that will be good for people. We hope OmNom can become a space where conscious-minded people can get together, connect and be part of a conscious community.”