Deciding which artist to put your money on 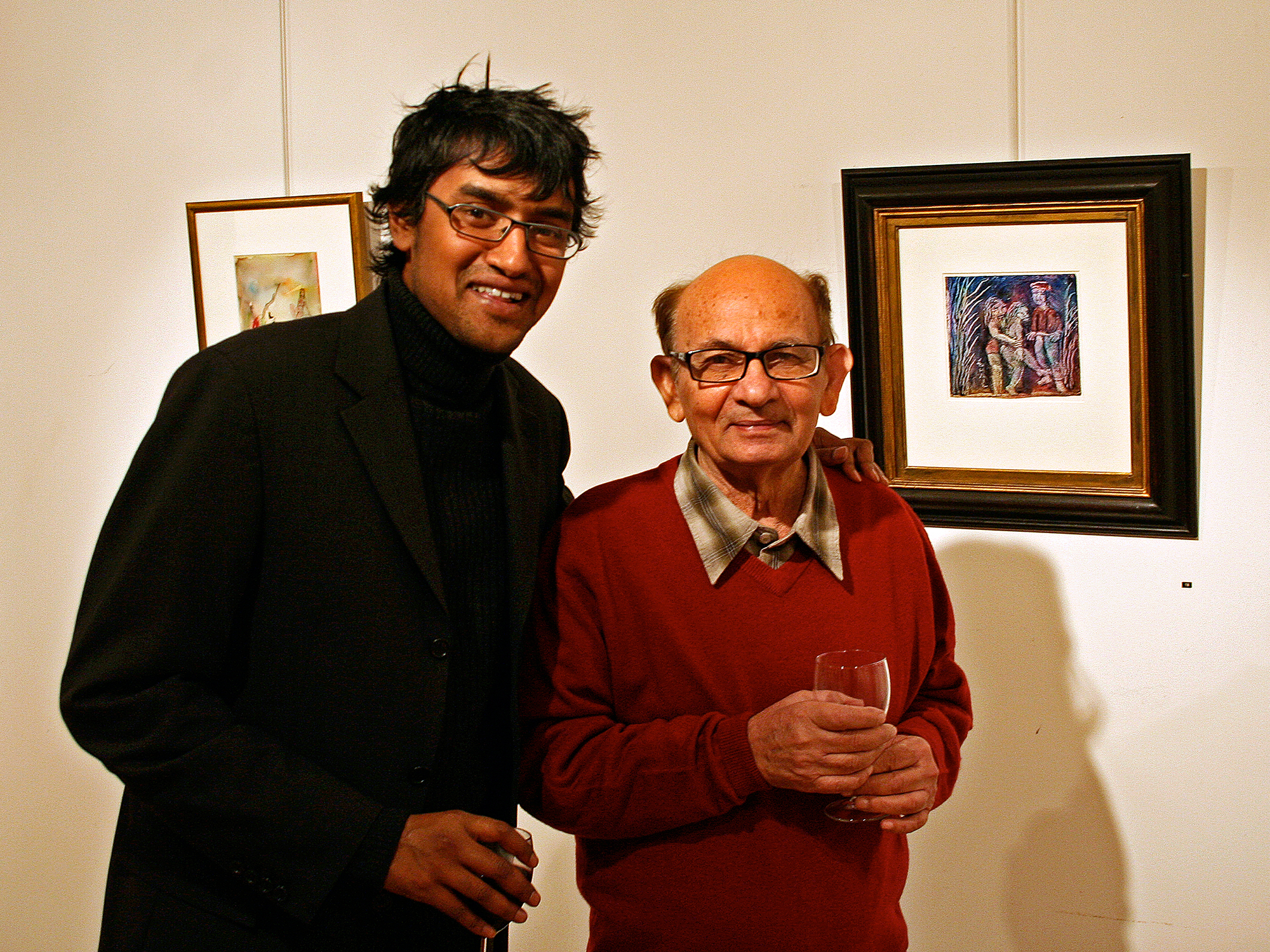 How does one choose the right artist to back in today’s sprawling South Asian art market? Jana Manuelpillai, from The Noble Sage Art Collection has provided this service for many years. Here, he shares the story behind his biggest purchase to date. 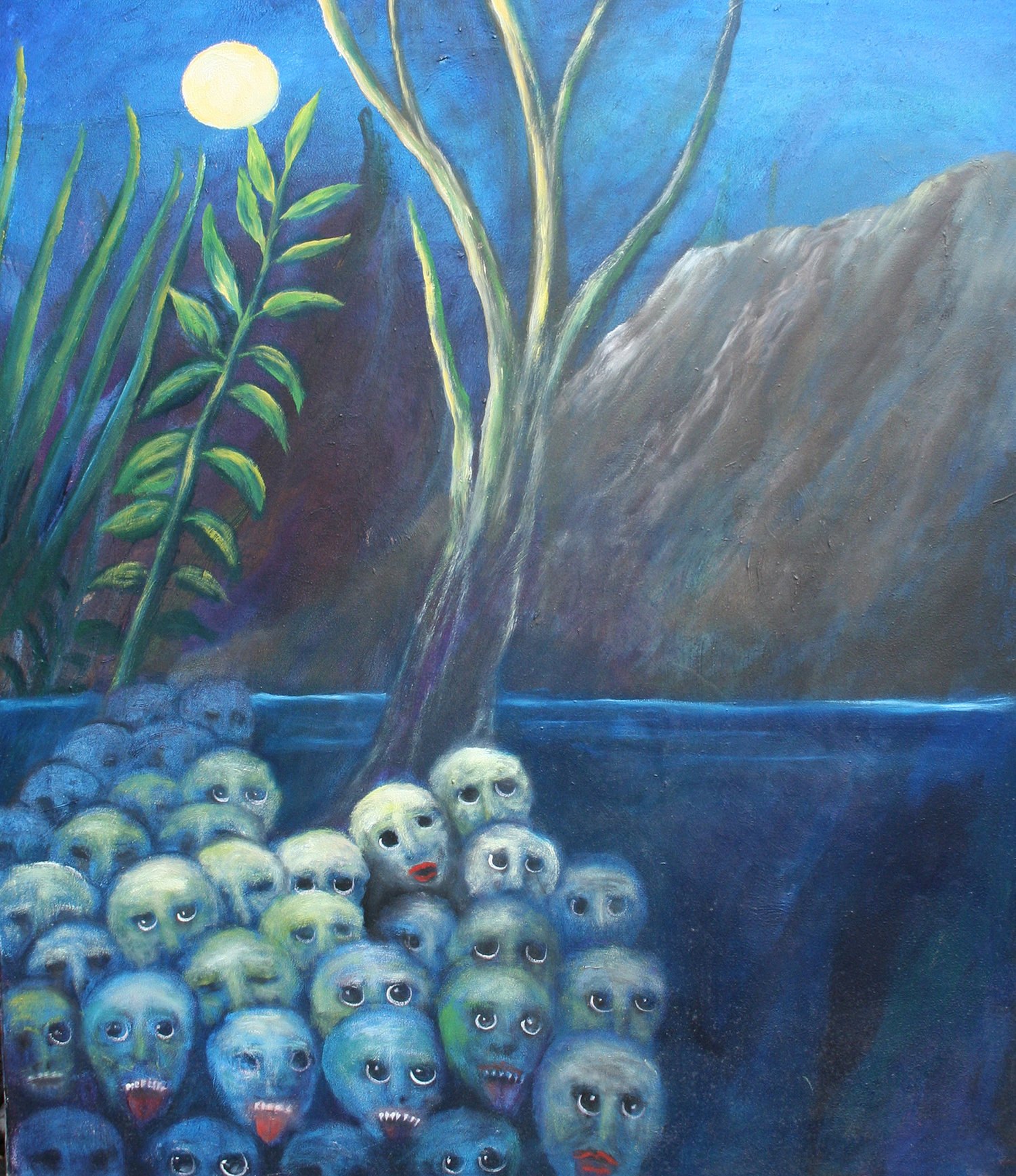 More than ten years ago I was approached by an older lady who had lived in North London for several decades. She was an ex-partner and good friend of the highly regarded Pakistani artist, Tasaduq Sohail. She described her relationship with Sohail during his early years as a struggling artist. She revealed how he had stumbled into art, his frequenting of strip-joints, his love of animals, his precocious sense of humour and his hatred of organised religion having fled to the UK after the Partition. The lady had a large body of artworks, papers and oils, that Sohail had left her and she wondered whether I would like to have an exhibition of the work in my gallery.

I must admit I wasn’t hugely aware of Sohail’s work and had not planned on including Pakistani artists on my roster as I had my hands full with South India and Sri Lanka. However, the story she told of this characterful artist, now senior and respected in Pakistan after years of working (a contemporary of the renowned Indian artist F.N. Souza when he also was in London), selling controversial pieces under the table… all this had my mind firing. Was this my Souza moment? My chance to back an artist of the newly forming canon of South Asian contemporary art? 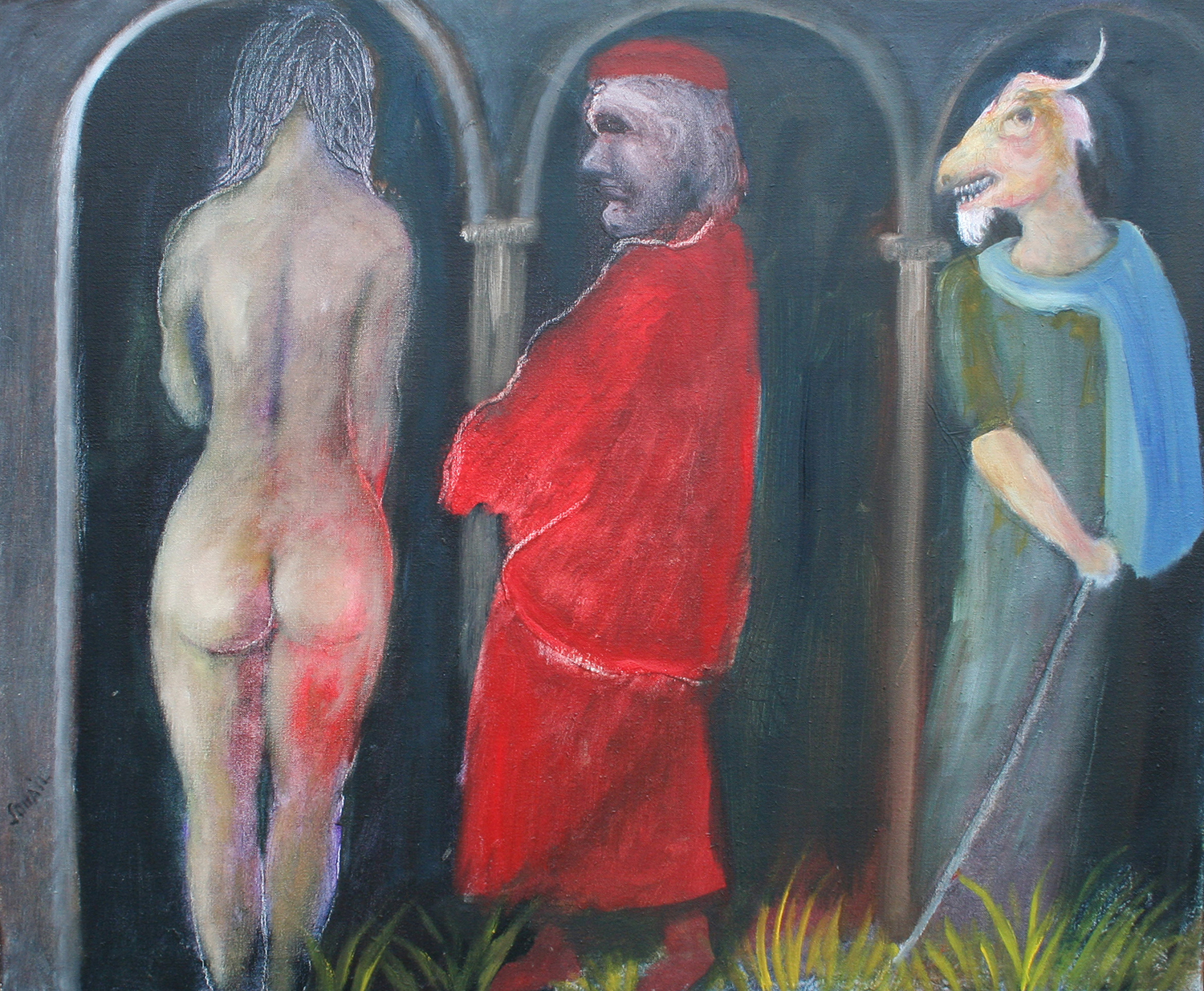 First, I had to really get to grips with Tasaduq Sohail and everything he was about. I started reading everything I could find online – interviews, articles, write-ups, critical reviews of his exhibitions. I looked for inclusions in significant books on Pakistani art and made a note of the writers who had discussed the artist and in what context. It is easy to just claim an artist is highly regarded but if this is true it will immediately be evident by the material written on him. I also analysed his biodata looking for historical issues or absences on which I needed further clarification. There were none. I looked for work by the artist in museum collections and happily found some in the V&A and Arts Council.

I researched all the galleries Sohail had relationships with and the prices he was selling for in Karachi. I learnt of the increasing number of fakes being disseminated in Pakistan’s art market. I saw this as a neat way of drawing a line between the authenticity of my collection and those from his Pakistan period after 2001. My collection would stand out for this feature. Simultaneously, I combed Artnet, Artsy and major auction sites such as Bonhams and Sothebys looking for Sohail’s sale history. Whether low or high sales, or even an evidenced presence without sales, all this was useful information and an indicator of his investment potential. I began to create an estimate price per square inch since 2000 for each year after to get an idea of how his prices were relating to his growth as an artist. I can safely say that nothing made me hesitant and I was even more impatient to see the work. 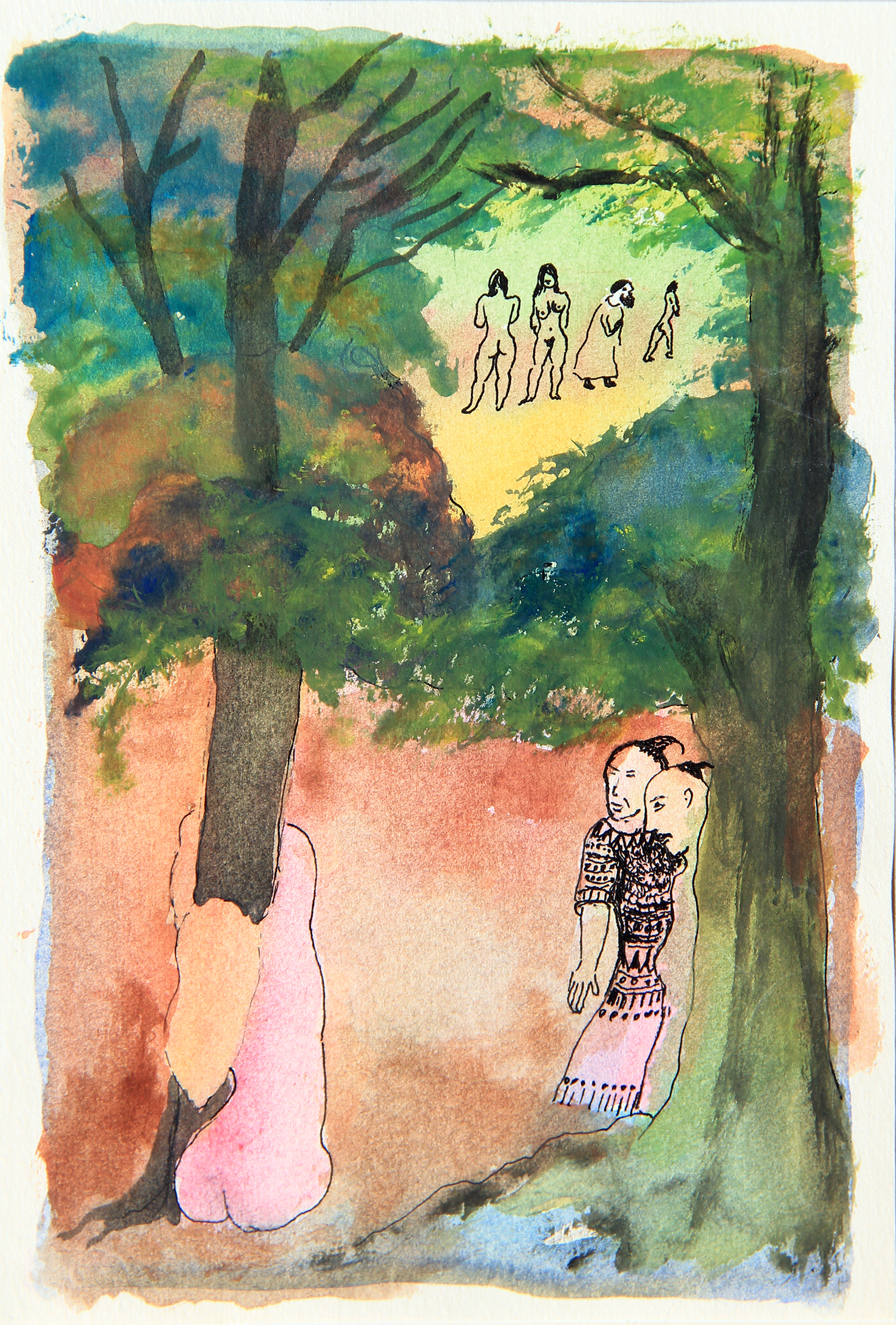 I journeyed up the Northern Line to visit a homely little house where my client still lives. I sat for a cup of tea and a good natter about Sohail. When the client brought out the first oil canvases, I remember instantly falling in love with them. This is where all the facts and figures, all the historical biodata, critical accolades and artist anecdotes all fall away, and, like a romantic film, it is just you and the art that is left. I knew immediately that I was about to make my biggest purchase of any one artist for my gallery so far. I noted traits of famous artists Marc Chagall and Max Ernst and nods to Surrealism here and there, and yet a visual content that was entirely original. I perceived the impact of the violence of the Partition, sometimes subtle and sometimes visceral. I felt the artist’s hatred of those oppressive religious heads that were tearing Pakistan apart. I witnessed his disgust at the subjugation of women, his (sometimes) horror at Western civilisation, and yet also his love of animals, Indian miniature painting and Persian poetry and literature. I enjoyed a deftness of line that was so skilled it was hard to believe that Sohail was largely self-taught. Most of all, there was what I describe as a ‘meta-continuity’ within his work: all the strands, different, connective and layered, all came from the same brilliant artist fabric. 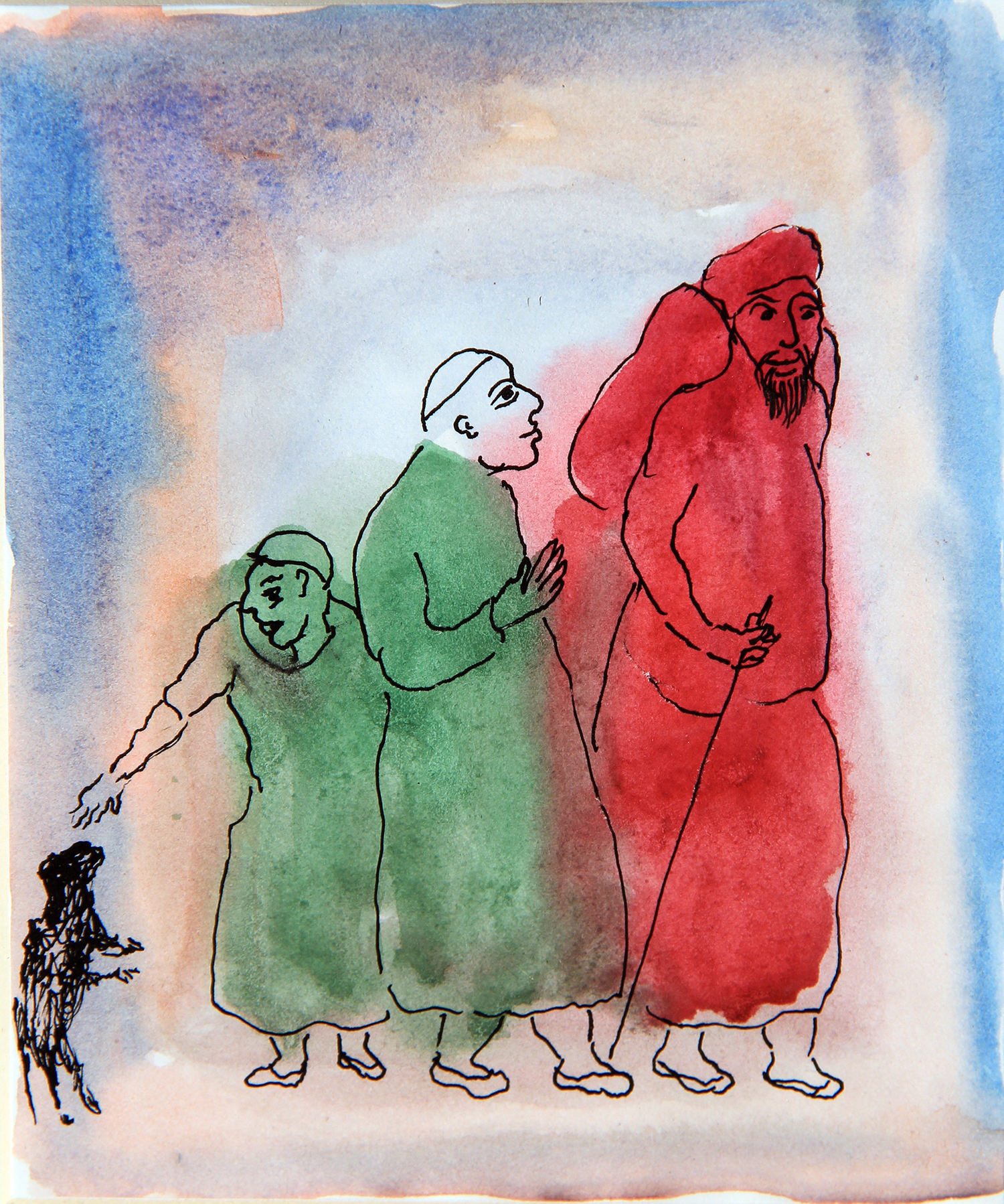 Soon after, I returned to see my client, this time with a list of works and a price I could afford to pay. My client, in touch with Sohail, was happy with my healthy offer and agreed to the sale of some 70 works on the proviso Sohail would attend the exhibition. Sure enough, Sohail flew over from Karachi and it was a delight to meet him. He was funny, bawdy, flirtatious and great fun at all times. He regaled us of his run-in with Souza, stories of his numerous poorly paid London jobs, his annoyance of being compared to Chagall and of selling the paper works in the exhibition off a Bayswater fence for £50 a pop once upon a time. It was a great honour to have represented Sohail, particularly as the artist sadly died in October 2017 at the age of 87. The show was a tremendous success for my gallery and I remember the glee on Sohail’s face to see his works again after all those years.

Today I am a veritable addict and have just under 120 works by Tasaduq Sohail in my collection. He is certainly one of the proudest parts of my collection and indeed just this month I hope to make my first sale of seven Sohail works to the Tate Museum collection. For me this is a vindication of everything I saw in Sohail more than a decade ago when I took a chance on the huge purchase and a punt on his future success and recognition. It is a nod to trusting your instinct coupled with some good solid research. To me, furthermore, it is a worthy inclusion of Sohail in the global canon of art history. Not only does this add weight to Tasaduq Sohail and to the sale of his work worldwide, it automatically underlines my collection as a trusted source. I never bought Sohail’s art simply as an investment. I bought it because I loved everything about it and coveted the artist for my collection. It still brings me the same joy as it did on day one. However its investment potential was a key factor in my research and, in this case, it has paid off handsomely.

Jana Manuelpillai will be holding a Tasaduq Sohail exhibition later this year. If you are interested in attending the show, do get in touch with him on [email protected] or by phone on 00(44) 790 1944997